We’ve had a leak in the kitchen sink faucet for quite a while.  Nothing major, but enough to have a slow drip going pretty consistently.  This past weekend I finally found (created?) a couple hours block of time to try fixing it.

I watched a couple short videos to determine the right sequence for dis-assembling unit, turned off the water, laid down a couple towels, and got into it.

Our faucet assembly is Moen brand.  There were no such replacement parts at Home Depot.  They had  a generic, analog cartridge made by Danco, so I decided to give it try.  It was the only option, really.  Otherwise, leak on? Not an option.

I got home and following the fairly simple steps of replacing the part.  It seemed to going going along ok.  I even got some of the calcium build up cleaned off the parts.  I was feeling good.  Then the last handle piece had a hard time settling all the way back on.  Gave it a few good taps with a hammer, down it went.

But the tapping with the hammer?  It did enough minor damage to the hole where the screw was to go back in to secure the handle to the fixture, that…? The screw wouldn’t go down.

Foiled?  Not quite.  I went out to the shed, to my stash / collection of bolts, screws, nuts, etc. I found a screw with a slightly smaller head, similar thread, and voila!  “Good enough for government work,” as the saying goes.

A few lessons from this little weekend effort:

2/ Don’t give up if things don’t work immediately.

3/  With house projects, and building/repairing in general, be prepared to improvise to get the job done.

And that faucet?  No more leak.  The handle is a little skewed, but oh well.  That’s life sometimes.  A little skewed.  But it still works.  And life goes on. 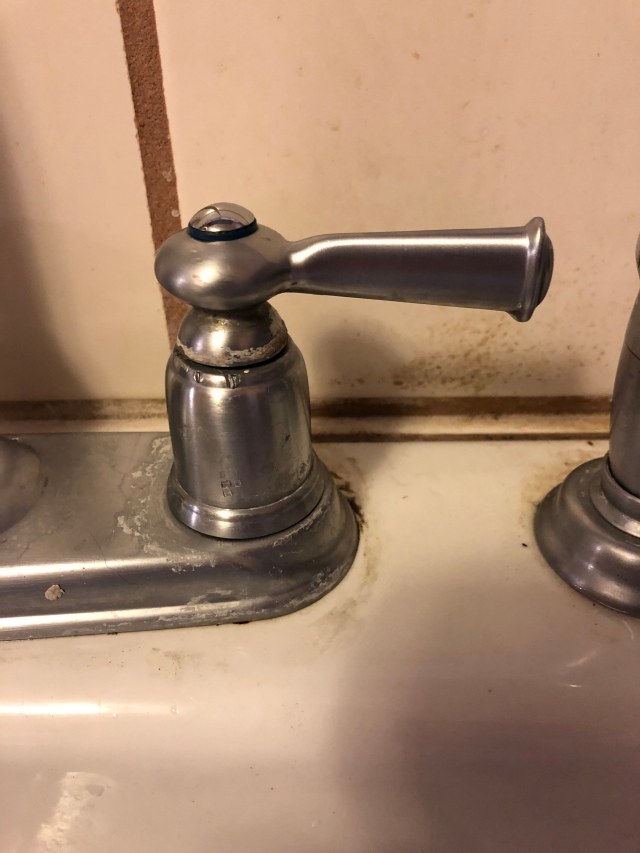