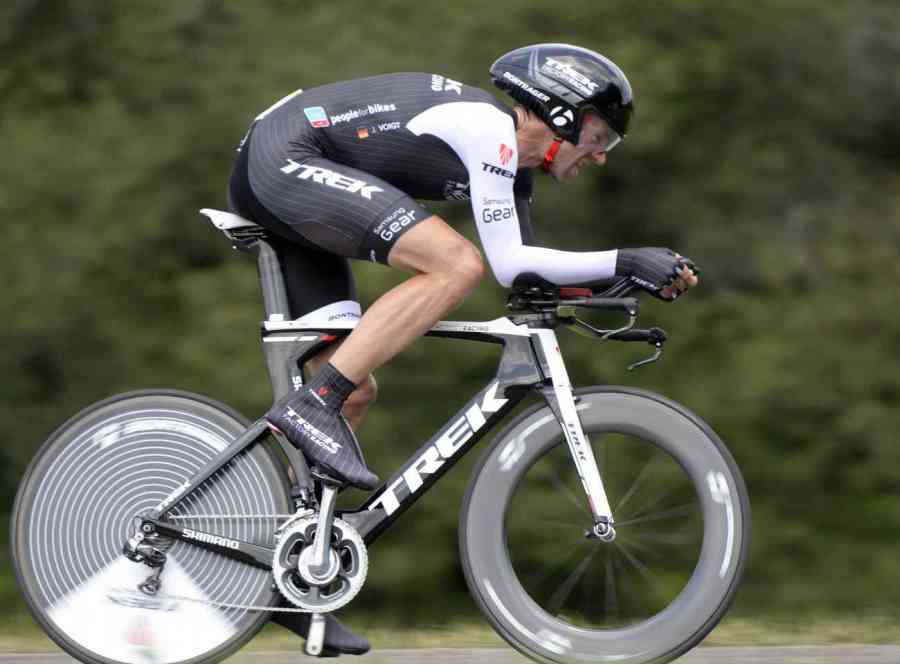 Jens Voigt will be 43 on 17 September.  On 18 September he’ll be trying for the new record on the “Magic Hour”.   What is that, you might ask?  I know I did.  It’s one of the oldest records in professional cycling.

What Voigt will try to do is beat the hour record of 49.7 kilometers held by Ondrej Sosenka. The record attempt is scheduled to occur on September 18 in the Vélodrome Suisse in Grenchen.

Below is a piece I wrote a while back about Jens, under the title “Old Guys Rule”.  Yes they do.

Jens Voigt has been racing his bike a long time.  What started out as a means for his parents to help him expend some of his enormous reservoir of energy as a youth, right up today, he likes nothing more than to peddle his two-wheel stead to the front and ride faster than everyone else.

This season Voigt demonstrated once again that his basic philosophy encapsulated by the simple phrase he tells himself when racing, “Shut up, legs!” is still effective.

Asked if his innate racing sense is something he can mentor a younger rider to do, Voigt replied, “I have a big engine; I can handle a big work load. I’m willing to work hard. I think this instinct is just part of who I am. It’s hard to teach because the decision-making is done in just a split second. It’s like a voice talking in your head, saying, ‘Go now! Go now! Go now!’ And then listening to the voice. I try to teach the boys to be brave, be courageous. On Sunday night if you have some energy left, it’s too late. There is no stage on Monday. Get it all out now. Don’t be afraid. Don’t be intimidated.”

Last year after the California time- trial which had Voigt on the podium in second place, he commented that he enjoyed every moment because he didn’t know how many more opportunities he would have to be there before his career was over. But last August he produced a stage win in Colorado and won a race in Germany two weeks ago, along with today’s win, making podiums look like a regular thing for 41-year old Voigt.

“I like to call this the ‘Indian Summer’ of my career, not the twilight,” he laughed. “Think how beautiful it is in Indian Summer. That’s where I am, in the Indian Summer of my career. Yes, I hate to admit it, I am getting older, and my career will come to an end one day. For the second year in a row I am the oldest licensed holder in the world. The oldest bike rider! But age is just a number, apparently.

“I think that you can’t only talk the talk, you have to walk the walk. If you can do that, there is no reason to stop or slow down or give it up.” Asked about earning himself another year’s contract with the win, he answered an emphatic, “I hope so! If someone asks me if I am ready to sign again for another year, I say ‘Hell yeah!’ ”

Great attitude, great life approach, great inspiration for us all.  Thanks, Jens, and Go man GO!